I can proudly say that the second snow day in GW was one of my best days in DC. To begin with, the snow day notice saved my life. I was to have a test that day that I did not prepare enough – for I had started studying for that course from after midnight on that test day – just to find out that the materials that needed studying was way too much to study overnight. I was literally going to stay up the whole night for that test when I heard of the possibility of another snow day in GW. I was quite worried though, that the snow day rumor may not be true, with my American roommate saying things like how GW is tries to avoid announcing snow day because once in the past there had been too many snow days announced in GW that a law school student sued GW for canceling classes too frequently. Anyways, the moment I got my email from GW security at 5 am, I nearly jumped with joy, closed my books and went to bed right away, and woke up past 12pm.

After cooking something for lunch, my friends and I went to the Pentagon City Mall to do some shopping for the upcoming spring break (we were going on a cruise to the Bahamas), only to find out that it was an unwise decision. It did snow a lot – even Uber charged extra $15 due to the weather – yet still we thought the shops in the Pentagon City Mall would be open because the Pentagon City Mall is an indoor shopping place. Yet our guesses proved to be wrong, and when we got there most of the shops were all closed, with only a few food stores selling food. We had no choice but to come back without any gains.

Yup, so my snow day started off not so great. Yet there’s a saying: “Though thy beginning was small, yet thy latter end should greatly increase”. I guess my snow day was a day that exactly fit to those words. My friend invited me to join dinner with her friends in the dorm, where we cooked food together. I made some fried chilly shrimp and lemon cake for dessert. Most of her friends were American, GW students who already had their experiences of Study Abroad in some other countries. There even was a guy who did his studying abroad in Korea, my home country. We talked mostly about our experiences of studying abroad, and those American friends there seemed very interested in the reason I chose to do an exchange program at GW and about my current life in DC. 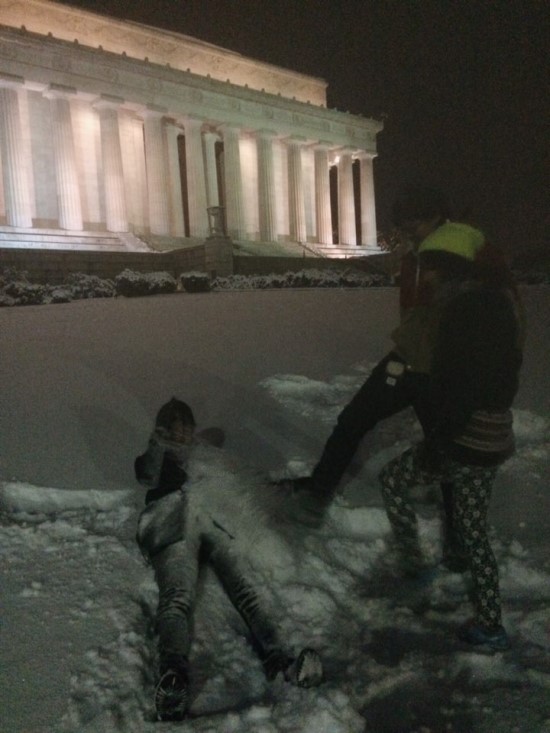 After dinner, at around 10pm, some fellow exchange student friends and I went out to take a walk to the monuments and have fun in the snow. It wasn’t as cold as expected, yet the roads were very slippery. We first headed to the Lincoln Memorial, where we lied down and made snow angels on the untainted, pristine white snow field. We also tried making a snowman, but the snow was too soft. We found an already made snowman and took a photo with it instead 🙂 (thanks to whoever built that snowman). It was a nice night-walk, to leave our footprints on untrodden clean snow, getting a sense of being purified mind and body by looking and touching the white snow, in the cool night air. With hot chocolate in our dormitory afterwards our stroll in the snow, there was practically nothing else that we would long for! 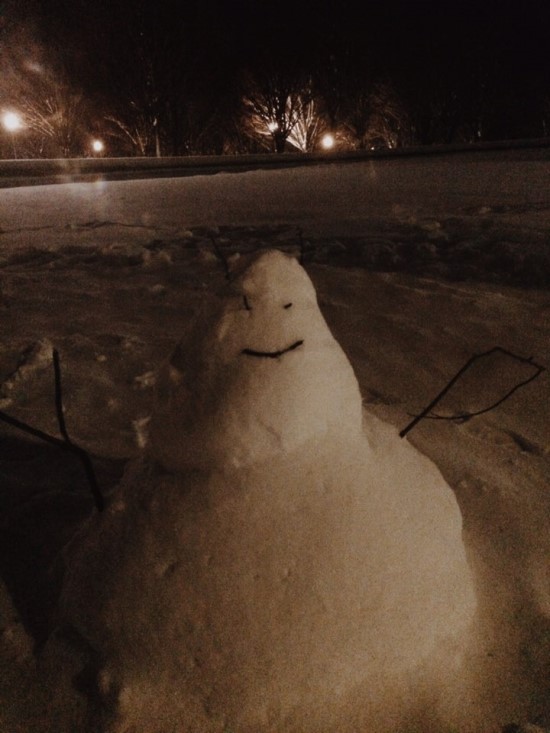