Well this is it: my time at GW has come to an end. And how soon it ended! These past weeks, winter has not ceased howling, desperate to remain a while longer. And like a Shakespearian play, the weather has been a reliable barometer for mood around Foggy Bottom campus.With the onset of finals, the best adjective to describe most students’ faces would be howling. Not for me: I’m finished. Bring on Spring and Summer I say! So far the harvest of my academic labour has been pleasing. I got an A in Naval History, Hebrew Scriptures and a B+ in History for the American Presidency class I took. Spanish was a big disappointment, the reason being: I couldn’t take a test when I visited Cuba. Therefore, as the GW Language department views cultural immersion as a carnal sin, my final Spanish grade suffered as a result. My fluency in the language increased, and my grades went down. I guess that's just the way the cookie crumbles sometimes.

My favorite subject at GW was by far An Introduction to the Hebrew Scriptures with Professor Christopher Rolloston. Rolloston is a teaching genius. What is his secret? Repetition. It’s the way he does it that is so skillful. When he is approaching an important fact whilst speaking, he will suddenly pause, his inquisitive eyebrows will tilt slightly, and then the audience will respond accordingly: the first temple period ended in ______? (586/587 BCE). By the end of the semester everybody in the class knew all the books of the Old Testament, quite literally hundreds of names and significant dates. Moreover, students knew the context behind all the data. What is the point in learning facts and figures of yesteryear you may ask? The key to the future is the past. And Rolloston surely helped us to get a grip of the past. It was fascinating to learn how the Empires of neo-Assyria, Babylon, Medes, Persia and Greece were once mighty fortresses: the epitome of human strength. And they fell like a deck of cards. All of them. Which causes me to ask the question: how long will the USA last? It has only been the leading regional hegemon since 1945. That’s barely seventy years. The Kingdom of Persia, on the other hand, lasted for 220 years. Professor Rollston’s class truly helped put 2016 into the grander scheme of things! 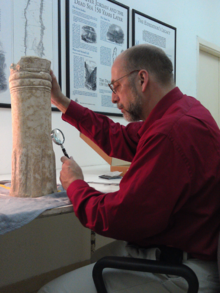 My favorite Professor at the GW, Christopher Rollston.

I feel like I could write a thesis on my experience in America; there are so many interesting observations to make. The short version is that these past few months have been life changing, as clichéd as that sounds. Doing an exchange semester truly tests you on so many levels. You have to be patient as you become accustomed to the humour, habits, and mentality of a place very far from your own home town. DC is an amalgamation of countless cultures, yet somehow it all works. Although I'm sure the cold winters, support for the Nationals baseball team and a love of politics gossip all play there respective part, the thing that ultimately binds Americans is the continued belief that America is the Land of the Free and Home of the Brave. Racism exists in America, more than I realized. Poverty exists. Ignorance exists. But these qualities are outmatched by overwhelming generosity, altruism and optimism for a better tomorrow. Whilst there is no such thing as a perfect country, there can always be a better infrastructure that creates a more comfortable, more fair and considerate country. Progress is being made in that direction I believe. I sure hope the 2016 does not sour that progress. If Trump gets in it may do just that.

George Washington, that respectable man, once said that we should "labor to keep alive in your breast that little spark of celestial fire called conscience". Rather than return to Australia Americanized, I will return as someone whose 'conscience' still burns. America has a lot of glow and glitter, a lot of pomp and pageantry. It is not those things that have really spoken to me. Hollywood, the White House, New York City, these are all commendable achievements of man's might, but they can be dreadfully impersonal. What I will take with me when I go to Australia are the memories of the people I met. People, not places, are the important ones. Whether it be my professors, my class mates, room mates, work colleagues at Gelman library, church friends or the man sitting next to me on the metro who smells of old people and soap: each one left a lasting impression that has impacted upon me as a person. Thanks for the memories! And, as a certain chubby pig once said... Margaret and John Gonglewski, the great hosts of the exchange dinner.

Los Tres Amigos! Sam Mayerson, Chris Chan and I, at the end of semester choir performance.

The wonderful Smith Family, thanks for all your support!

Gordon and Julie Thomas, a.k.a. my Virginian mum and dad!

Gelman Library selfies! -I worked there for 2 months. It was a great experience.

one of my favorite person is doing the last announcement.

A sneaky moment at the library, late at night!

Yesterday several of us Australians and Kiwis woke up early to attend the dawn ANZAC Day service. For those of you who don't know, ANZAC stands for Australian and New Zealand Army Corps. Every April 25th there is national holiday in both countries to remember our war dead. The acronym was given during World War One because Australians and New Zealanders trained together in Egypt before seeing action in various campaigns. The first campaign that the ANZACS saw significant action was the 'Gallipoli Campaign'. Essentially, the allied commanders, including Winston Churchill, had concocted a Grand Strategy to destroy Germany and this included aiding Russia. To aid Russia, the plan went, the allied troops would knock Turkey out of the war, which was allied with Germany. As bizarre as that sounds, that's the reason that young men from nations far away, where the eucalyptus and the silver fern grow a plenty, were sent to lay down their lives in Turkey.

The Gallipoli campaign was a complete shambles. In just 8 months, 8709 Australians and 2701 New Zealanders had paid the ultimate sacrifice. Some Grand Plan, hey? Why do we commemorate this day then, April the 25th, the first day that they landed at the infamous ANZAC Cove? Well, for both Australia and New Zealand the whole ANZAC experience was a coming of age experience. These two burgeoning nations were seen  by other nations as being insignificant islands of the Empire where 'the sun never set'. When the young men dressed in khaki uniform, with their fixed bayonets, charged up the steep, steep Turkish hills, with unearthly screams and grunts, they made their presence known to the world. Sadly, the Turkish were well equipped with Maxim MG08 machine guns and ripped hundreds of the ANZACS to shreds. This baptism of blood, however, somehow announced to the world that Australia and New Zealand were real players. They were fair dinkum about fighting for what they believed in; they would not sit on their backsides while sadistic militants like the Kaiser bullied and bashed his way to Paris.

I grew up attending ANZAC services in my home town of Bathurst. Even 101 years after the first the ANZACS stormed ashore, the ceremony still pulls a large crowd. People come to cheer the old 'diggers', men and women who fought in WWII, in Korea, Vietnam and the wars in Iraq and Afghanistan,  amongst others. A pipes and drums marching band usually leads the march. People wave Australian flags. Some shed a little tear for their lost loved ones of long ago. Some people cheer as the veterans pass by, many so frail they are pushed. Here in D.C. there were no 'veterans' as such. The Australian and New Zealand expat communities are made up of professionals and their families mostly. Nevertheless, when we joined the crowd of about 700 people, it was an altogether familiar feeling of respect and admiration for those fallen servicemen and women. The bugle played. The flags were present, carried by soldiers with their traditional slouch hats. The Ambassador to Australia was present and read Laurence Binyon's 'Ode of Rembrance' :

They shall grow not old, as we that are left grow old:
Age shall not weary them, nor the years condemn.
At the going down of the sun and in the morning,
We will remember them.

There was a minutes silence. After, the awakening reveille was played. Soldiers saluted. Diplomats puffed their chests out as their beloved flags passed by. And then it was all over. The experience stayed with me for the rest of the day. I had been reminded of a very important part of Australia's history, and therefore, an important part of my Australian identity. From the ANZAC legend we can extract some lessons applicable to today. To help out other people when they are need. To lend a helping hand, without being asked (considering all of the original ANZACs had been volunteers). To be proactive.

With the rising sun on our necks as we sauntered past the Washington Monument, we spoke about how glad we were we had made the effort to attend. With the backdrop of Lincoln's memorial, the pool of reflection and the American Korean War Memorial, ANZAC day had had a distinctly 'Yanky' overtone. Nevertheless, the message that these memorials impart are one and the same with the ANZAC story. The American struggle for Civil Rights and the ANZAC story are just two different chapters from the book of freedom. Lincoln hoped that the lamp of liberty would 'burn in your bosoms until there shall no longer be a doubt that all men are created free and equal'. And far away on the shores of ANZAC cove many a lamp still burns. Lest we forget.