One thing I was really impressed by the United States when I came here was its strong protection and preservation of its historical heritage and history. Also, the guide tours in most national museums, cemeteries, and historical sites which are made to teach or introduce their stories are well-organized. Therefore, it is not rare to see teachers bringing their students to these places to learn. As an English major, I appreciate it so much because I can learn American history vividly on the spot rather than reading all those tedious materials only based on textbooks. In addition, I believe preserving history is the only way for people to remember what efforts their ancestors made and try not to make the same mistakes that will bring disasters such as WWⅠ and WWⅡ.

Among those places where historical sites are preserved and organized in a great condition, Philadelphia is my favorite one until now, and I strongly recommend those who want to dig into the 18th and 19th American history to go there. Philadelphia used to be the temporary capital of United States where declaration of independence and the constitution were signed. Hence, Philadelphia can be viewed as the starting point of America’s democracy. There are a lot of historical sites worth visiting like Penn’s Landing, Independence Hall, Old City Hall, Congress Hall, Betsy Ross House, Benjamin Franklin Museum, Liberty Bell, and so on. In brief, Philadelphia is a place best for a few day trip to get immersed in its historical atmosphere and admire the beautiful architectures.

If you crave for some delicious food, do not forget to try the famous cheesesteaks there! (Franklin Fountain should also be in your list if you also want to try some ice cream for your dessert.) 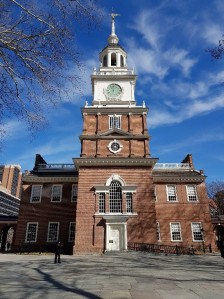 It was a random, rainy and cold Thursday night when we decided that we had had enough of D.C.

Not actually, of course. But sometimes, when your routine gets overwhelming and the weather doesn't help you power through it, it is normal to feel the urge to escape for a few days.

Me and my roommate felt that urge last Thursday night, as soon as we found out that there were no classes on President's day and that we had not planned anything. We bought round trip tickets from DC to Philly, by bus. This type of short term, last minute planning is definitely my favorite. And the US East Coast serves that purpose pretty well. I mean, where else in the US can you get away for 2 days at a price of 80$ to visit a major city?
This isn't something you can do if you’re in California, or Texas or even Chicago.  I like this European dimension of closeness that the east coast has.

We planned it out, recruited 2 friends and then we were ready to go. The details of our trip were as follows: 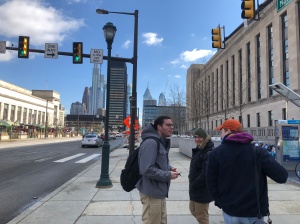 Departure on Sunday morning, and return on Monday night. 2 full days, 1 full night, 4 people and a full hostel. Full hostel meaning that other than us 4, our room was filled with additional people which, I know, is the very principle of a hostel. But as I had never sojourned in one, I was slightly weary of the concept. I did shared airbnb's or even co-ops several times in the past, but never hostel. The bunk beds remind me of a military setting and the fact that you share them with strangers is a 50-50 situation. Either strangers are normal, or they are not. However, there is no room for such perplexities and considerations when the price for one night is so low: 26$. Unheard of in D.C.

We arrived at around 11 am on Sunday. Unfortunately, we couldn't get rid of the D.C cold, as in Philadelphia it was about the same temperature. It was sunny, though, unlike in D.C. So the absorption of vitamin D compensated for the lack of heat.

We spent the day doing touristy stuff: the liberty bell, the independence hall, the museum of Art. We went to a pub at night, and the rest is history. No, we didn't do anything malicious by American standards, of course. We chilled at the pub and then went to bed. There was no weirdo, and we made friends with the other people in our room.

On the second day, we visited a super cool garden (see pictures) made with re-purposed waste. 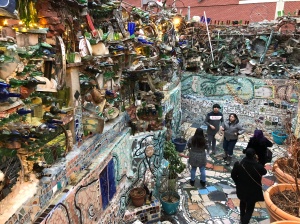 Philly is a cool city. Middle ground between a European city and New York. It is high rise, but also historical. Pretty hipster-ish, and more lively than D.C on a Sunday night. Food is good (shout out to Philly cheese steak!) and cheaper than D.C

My verdict is: great get away destination for a weekend. Hostels are mostly safe.