The comfort zone has always been a place I'm really comfortable in - school-wise. I've never felt the need to pick up a new sport, join a new club or go out of my way to meet new people. Being one to 'take whatever is thrown at me', I became laid-back and some sort of a hermit after school hours. Networking and meeting people was a chore in the past but rushing totally changed my perception of that.

Entering GW, I decided to try something that would be impossible to do in Singapore - join a Greek organization. But before you get all worked up about the partying, it's not the case. I joined a professional business co-ed fraternity, where meetings usually involve lots of work on resume writing, planning of social and professional events. 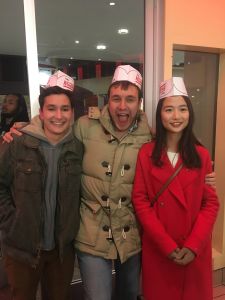 Just this past week, we had our first fundraiser: selling Krispy Kreme donuts. DC weather took a turn for the worse and plunged to the low thirties. Despite this, we walked in a group to Dupont Circle and then back to all the dorms to sell and distribute the donuts. It was my very first time going door to door trying to sell something and I gotta say it was a great learning experience! (We finished selling ALL our donuts within an hour so it was a huge success and thank you to everyone who bought them!)

Midterm week is here and having three papers in a week with two on the same day just meant that time during the weekends have to be put to wiser use. Hence, I visited the Hirshhorn for a short while on Saturday.

Situated halfway between the Capitol and Washington Monument, it was a breeze to get to. It's definitely a feast for those passionate about art - with artists such as Picasso, Matisse and Kline, you basically get the best altogether under one roof. I think my favorite were probably the Burghers of Calais in the Sculpture Garden. Commissioned by Yoko Ono, the Garden features sculpture pieces by Rodin.

As this and next weeks are midterm weeks, I did not get to do much travelling or sightseeing. However, I'll definitely try and squeeze in more once midterms end next week and before I leave for Spring Break!