Last week ended with a short weekend trip to Chicago. What I forgot to mention that at the time of booking Chicago, I also managed to book 2 consecutive weekend-aways to first Philly and then Boston. I'd like this attribute this behaviour to the autonomic response to the end of exchange semester. There's only a few weeks left of the exchange program so I should/need to cram all the travel I can. This makes up for all the other times I've been too lazy to organise anything. Gotta tick off all the boxes.

So this past weekend I hopped onto the Megabus to Philadelphia, the once capital of the U.S. I've heard a mixed response from people who have been to Philly before; some say "there's nothing to do there!" while others find it quite the opposite. I felt the latter. Philly was very different to Chicago or D.C.. I stayed at the Apple Hostel which was right in the Centre of Old City so everything was pretty much walkable distance if you wanted it to be. And it actually nice to walk around for a change. The row houses were beautiful. The old cobble stones that they laid down a few hundred years ago were still in tact in at Society Hill. 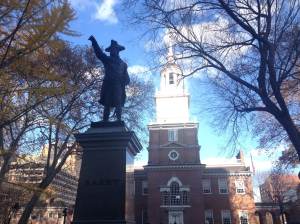 My favourite thing about Philly would be the historical aspect to it. The Independent Hall was a small but I learnt a lot about the American history, the signing of the declaration of independence and its important. The quote from the declaration echoes loud in the aftermath of the presidential election - "WE hold these Truths to be self evident that all Men are created equal, that they are endowed by their creator with certain unalienable Rights, that among these are Life, Liberty, and the Pursuit of Happiness--"

The second favourite would be the Philly Cheesesteaks that I had every-single-day, without regret. Jim's Steaks on South and Joe's Steaks + Soda were my favourites. The line snaked around the block when I stood at Jim's. To order like a true local, I tried to say just "Wiz With" for a cheesesteak with wiz cheese with onion. I probably ate it too fast walking down South Street. I missed out going to UPenn and the famous Rocky Steps and the museum that holds world renowned pieces of art, but I'll definitely return to Philly.

The other interesting thing that I have been working on for my Entrepreneurship class is building an app that allows people to find cool people to go to awesome events with. It's called CitySocial and our team has been building a landing page website that allows users to look at what we are about and sign up for a demo. If anyone's interested to see where this app takes off, you can help us by signing up! We promise we won't spam you 🙂

As the rush to the end of semester nears, I start to reflect on all the things that I wanted to accomplish on exchange.