Halloween is a huge thing here and last weekend wasn't everything, not at all. On Monday the exchange leaders prepared an event in the rooftop of 1959 E Street with pumpkins, music, and candy. It had been a long time since all of us were together, now all of us have things to do and I only see some of the exchange students and leaders. So it was really great to meet with everyone again. We had a really good time carving pumpkins, it was my first time and I really had fun, now I have my little pumpkin as decoration in my room.

Tuesday was the real Halloween day, and of course we went to do trick or treat.  A group  from the university planned everything for us, and when we saw on Facebook it was going to be in the embassies we thought there was no better way to spend the day, and we did´t need costumes. So we met in Kogan Plaza and walked to Embassy Row where we started going from embassy to embassy. Some of them only gave  one candy per person because we were many people, but others gave us tons of candy. In most of them there were people disguised, and you could take photos with them. I wasn't  that exited about trick or treat at first, because in Spain only the kids do that, but it was a good time to get to know more about Washington DC. What most surprised me was all the university students that were doing trick or treat on their own, dressed up with costumes, as I said, in Spain this is not something a university student would do.

During the night there was another event in 1959 E Street, with free pizza, cotton candy, and cupcakes. I really love when they do things like this, because is the only way we have to meet people in the hall as we don't have a dinning room to meet with the rest. Another crazy thing about the United States is that they really have a thing with free food. There is always some type of event with free food in it. You won't see that happening any time soon in Spain. I think that is probably because we don't have clubs as they have here, so no one is up for preparing anything. After all, students are much more invested in university activities here.

The rest of the week was as any other, although we went to Georgetown on Thursday to buy clothes for winter as the weather is finally getting colder, the rest was all about writing all the papers I have for next week.

However, on Saturday we tried something different and went to a coffee shop to study. It is especially prepared for that, with books everywhere, and enough space for you to study. It is called Busboys and Poets, and you can also have lunch there. In the afternoon we went to Arlington National Cemetery. I had never been there before, and I have to say I was impressed. There were so many rows of tombs creating a beautiful picture, being autumn made everything even better with the beautiful colors of the trees. Visiting it is a must of the things you have to do in Washington DC. 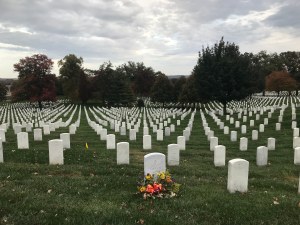 On Sunday we went to have brunch. We went to a place called Ted's Bulletin, and I love this place. The food was amazing. But it was crowded, so maybe you need to make a reservation beforehand. Anyways, it was one of the best brunch I have ever tried. 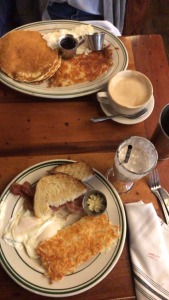 Other exchange students had told me about running in the National Mall, and how awesome it is. So to finish my week I decided to go for a run instead of going to the gym. I'm not used to running, but I enjoyed it anyway. Of course I had to stop to take some photos because the monuments at night are breathtaking. I'm definitely doing it again.