At Rupert’s, Montreal, I came in contact with a North American First Nation's person for the first time. It was a wonderful experience. The night had started rather normally. Fellow exchange student Louise Bicknese (The Netherlands) and I were enjoying our first poutine, a typical French Canadian dish consisting of French fries, cheese, gravy and shaved meat. It is the kind of food you avoid if your dieting. Big time. One bowl of that deliciously deadly consistency and you could knock 6 months off your life. Easy. It was Friday night, however, and I was not dieting, so poutine it was.

It all started when the lady next to us inquired about our accents. After some chit chat, we had asked where she was from. “My name is Patrica George and I'm Cree” she said. The first thought that came to mind at that point was me as a young boy encountering the concept of American Indians for the first time in the 1990 film Dancing With Wolves, you know the one with Kevin Costner? Since that time, I had always wanted to meet a First Nations person.

As Patricia kindly proceeded to tell us the story of her life, I listened intently with a burning curiosity to learn more about what it is like for a First Nations Person in the 21st century. The images that first developed in my mind as she spoke were that of a bucolic paradise. She spoke of the human interaction and connection that Cree people have on a day to day basis. They hunt, cook, share and live together by the atmospheric wonder that is the Great Whale River in far northern Quebec. It sounded like a real community lifestyle. As she continued to share, however, I stared deep into her hazelnut eyes and a saw a flicker of the emotional abuse she and her fellow tribesmen had experienced for generations. In a nut shell: the Majority has tried to crush the Minority, but the minority has not been crushed because it refuses to surrender.

Something really special that Patricia shared with us has remained with me. She told us how in 1990 the Quebec Government announced the construction of the Great Whale Hydroelectric project which was to divert eight large rivers and affect an ecosystem the size of France. Patricia's people felt that enough was enough. So, the James Bay Cree in the far north of Quebec joined with the Inuit Indians in the area to build a special canoe. In the spring of that same year a mixed team of both Cree and Inuit Indians paddled their ‘odeyake’ canoe from Whapmagoostui, Quebec, all the way to New York City. It was a momentous task: 2000km in just 5 weeks. By dogsled over frozen lakes, by dusty abandoned road, by rapid river. These brave descendants of some of the earliest North American people's came united: to protest the proposed Great Whale Hydroelectric project. And you wouldn't believe it. The project was cancelled. The $12.6 billion Great Whale project was ripped to shreds in front of the greedy eyes of Wall Street stock brokers. I bet Bernie Sanders cheered that day. The mammoth Odeyak canoe journey had not been in vain. The Cree and Inuit triumph sent a message of hope for all minority indigenous groups-not just the First Nation People in North America-but right throughout the globe.  Were the Cree to have resisted singing their song and sharing their own special identity, an enormously ugly dam would have flooded ancient camping grounds with eons of history.

These are the kind of things that should be taught more in our schools. The triumph of the minority over the majority deserves a more prominent place on history's page.

So I'd like to say thanks to Patricia for taking the time to share her personal story with us! I hope that this blog entry encourages others to research more into this incredible modern-day David vs. Goliath story. 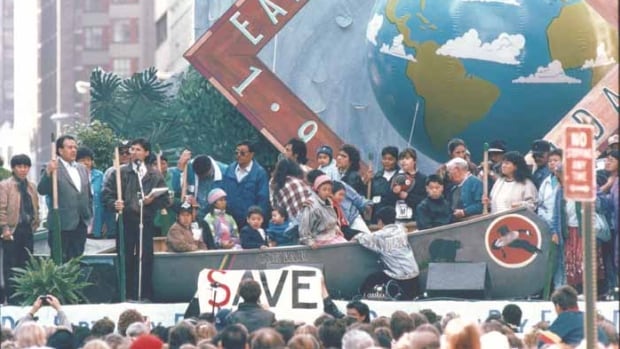 The location of Great Whale River, the Cree community Patricia comes from.