As always, this week was another crazy busy one as I prepared for assessments, exams…and a weekend trip to New York (again). Post-Spring Break the workload has definitely picked up again as many of the courses I am taking have approaching deadlines and with a few weekend trips coming up, I certainly am doing my best to get ahead on my work.

"I think that an important piece of advice that I would give to exchange students on their way here is to not let yourself drop the ball on all your assignments, etc in lieu of trips."

Whilst I think that it is really important to go and take advantage of being in such a central location and having the opportunity to go and see as much of America as is possible, in the end, if you get behind on the work it is only going to prohibit you from doing something else you may really want to do as you will have to catch up. In saying that, if you can get ahead on some things and leave others to do as they are due, you should find that you have plenty of time to do well in your classes AND really explore DC, as well as more of America. I think that whilst on exchange this is probably the toughest thing to balance in terms of time management but it really is so worth it because this country has so many awesome places to visit and explore!

Whilst this week I didn’t have as much time to sight-see DC (well not since the White House visit that I wrote about last week at least), I did make enough time for myself to squeeze in a New York trip this weekend - which is where I am writing to you from now!

Although I came to New York at the beginning of last month with two of the other exchange students, as a mad theater lover, another trip was totally required (and I’m coming back another couple times before leaving the US as well), especially because one of my closest friends lives in the city.

Despite my mantra being to try something new each week, I decided this time to also try and re-visit something old, and so, on Friday, I headed over to W 45th Street to the Broadway Dance Centre. Having not taken a dance class in the last few years I decided that it was time to revisit – I used to dance a lot – and challenge myself in a theatre dance class. Coincidentally it was also world theatre day and so it seemed to me to be an appropriate way to celebrate! The class was great – we learnt the original choreography to Chorus Line finale, ‘Once,’ and whilst I had a great time doing it, I certainly felt how out of practice I was. And now, two days later, my body is still feeling the pain! Apparently going straight into jumping high leg kicks ala Rockettes after years without practicing will hurt every muscle in your body – especially the ones that hadn’t been used for too many years! Despite the fact that I can barely walk now (okay, I’m exaggerating – but still…), it was totally worth it and I loved getting back into class – I definitely need to try and do it more often. 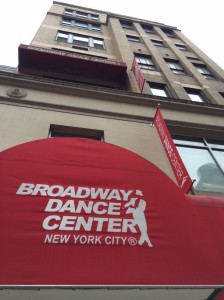 That night I tried my something new as I entrusted my friend to pick a restaurant and found myself in an Indian restaurant that looked as though it had come straight off a Bollywood set. The place was hilarious and we had a great night before continuing to explore the village area and then finishing the night with a good How I Met Your Mother Marathon – when in New York, right!

On Saturday morning I went and lined up for rush tickets to see a show (that I will talk about in a minute), which is a great tip to anyone coming to New York who wants to see a Broadway show but is on a budget. Many of the shows here have what they call ‘student rush’ or ‘general rush’ tickets which means that if you line up before the box office opens you can often get a ticket at a significantly discounted price (like $39 often) for the show that day/night. It’s totally worth it if you don’t mind waiting around for like an hour!

My friend and I then began our morning in total New York fashion with some delicious bagels and a subway trip downtown. We went to check out Eataly – because its amazing and delicious! – and then walked from there down to the Chelsea Markets to go for a little wonder. After a long day of walking and having fun, we finished the night at the theatre – the best way to end a night in my opinion! We went to see ‘The Audience’ starring Helen Mirren as the Queen – WOW!!! It was fantastic – a very interesting view into the relationship between the Queen and her Prime Ministers. Helen Mirren is completely mesmerizing – what an unbelievably skilled actress…and we got to meet her at the end of the play! Highlight = being told that we are “beautiful young ladies” by an English Dame/Academy Award Winner/Total Hero! 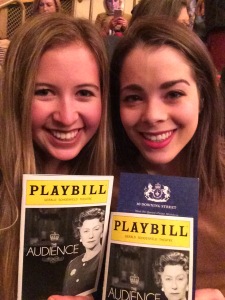 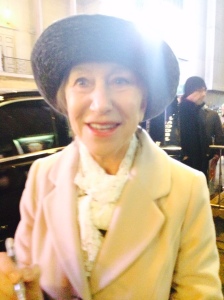 Sunday morning and we enjoyed a bottomless brunch at a beautiful little restaurant called Vice Versa – so delicious! 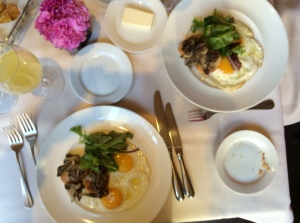 I then went off to see another show – a new musical called ‘Fun Home’ – which is an incredibly unique show that doesn’t have the ‘glitz and glam’ that is often expected of Broadway shows but that left not a dry eye in the audience by the end of the performance. The intimacy of the theatre (Circle in a Square) made the storyline that much more heart breaking as you felt as though you were in the home of these characters as they come to life changing decisions and revelations about one another. The child actress who played the young version of the main character was a stand out which is always nice to see – she was brilliant!

Sadly, after a How I Met Your Mother marathon with my friend, it was time to say goodbye to her and to the city as my weekend of Broadway fun was at an end. And so now, I’m writing this from my very delayed Amtrak – must admit, I think that the Greyhound was easier in this case!

I’m so excited for the next couple weeks coming up as my mum is flying in from Australia to visit and I cannot wait to see her! There will definitely be a lot of showing her around campus and DC.

So, until next week…