As our study abroad experience winds down before we can even blink, my friends and I have already been discussing how much we will miss this sights, sounds, places, foods, and basically everything except school. This is much in part due to how fortunate I have been to travel a few weekends, the family I have met in Ireland, my great group of friends, but mostly due to how amazing my adopted city of Dublin truly is. Dublin has everything: a walkable inner city, a lovely coastline, beautiful suburbs, one of Europe’s largest inner city parks, and awesome attractions like the Guinness Storehouse, Christ Church Cathedral, and Kilmainham Jail. And with easy transportation to every corner of Ireland, and cheap flights going across Europe each day, it is really the place to be.

One of my favorite parts of the city has been the restaurants and pubs. Dublin is nothing without its good food and famous nightlife. The Irish often spend hours at a restaurant and even longer at the pub. There are three spots in particular that I really enjoyed.

I am excited to hopefully add to this list as I see what my final two weeks in Ireland have in store!

For those of you who don't know me already, (and those of you who are going to know this about me very soon,) I'm that crazy cat lady that's gonna have 40 cats and knit sweaters for each of them when I'm 80. So... you can imagine how fulfilling it was for me to visit the Cat café in Paris yesterday. Pretty much internally combusting the whole time. Seriously, I have longed for a touch of the cats since I left my own kitty three months ago. This obsession is kind of a problem. On a completely random side note, did y'all know there is a cat park in Lima, Peru? Like, cats just roam around and chill there like it's their hood? Yeah, favorite place on Earth.

There are two cat cafés in Paris. One is in Le Marais (4th arrondissement) and the other is near Bastille in the 11th. The one in the 4th is more well-known, thus requires reservation and such. We went around 12:30pm, which was a good time to go because the cafe opens around noon and the cats are usually still lounging around if you go earlier. Later towards the day they kind of get tired of people and disappear downstairs. 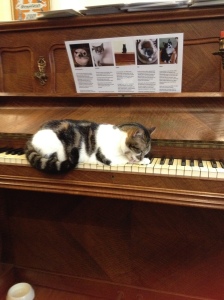 The café itself was very quaint and clean. You see cats everywhere, lounging, sitting on people's laps, stealing food (which was not allowed). The waiter told us the rules when we first entered. Apparently we can't disturb the cat, like if a cat is sitting on a chair, that's his chair, we can't just re-locate him somewhere else. We can't forcefully pick up the cat if the cat doesn't want it. (consensual pick up?) We can't feed the cat because they follow a very strict diet. (Though from the size of the cats there, I presume they sneak in a bite here and there). The cats are mostly adopted from an animal shelter or rescued from the streets. There were information on each cat and their lives before being adopted by the cat café. As a cat lover, it really breaks my heart to see how a lot of them had been abandoned or mis-treated really badly by their former hosts. I never understand why anyone would do that.

The food was mediocre. Nothing too outstanding. Though I highly recommend the planche vegetarian. The salsa and the guacamole was to die for. Their quiche looked pretty enticing too. But again, i have the tendency to order the wrong thing and mooch off of others.
During the time that we were there, I picked up a kitty and he wouldn't stop clawing at my food. Eventually he got two pieces of potatoes on to the floor. As I was about to bend down and pick up the potatoes (so the cats don't eat them). The kitty snagged one away from me and bolted into a far corner of the room. He was like, HA HA stupid human, peace out! Too bad, I thought it was love, but he only used me for food.

So, in case international affairs and security policy doesn't pan out, cat café is my destiny.