Thanks to Margaret Rajic, CCAS BA ’16, and Matt Palmer, CCAS BA Psychology ’16, for sharing their story! 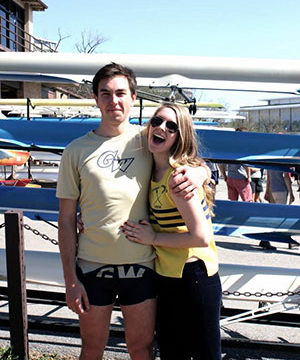 Matt and I met during our sophomore year at GW because we were both living in The Dakota. He was on the Men’s Rowing team, and we were introduced by our mutual friend and his teammate, Keenan Freyberg, ESIA BA ’16.

After hanging out every day for two weeks, I took Matt to a classical chamber music concert on the Vern (something I was really into, and that he pretended to enjoy for my sake). While waiting for the Vern Express shuttle on a swinging bench in front of the library I asked him “what our deal was.” Matt said, “You stole my thunder! I was going to ask you to be my girlfriend later tonight!” We’ve been together ever since!

Fast forward to almost four years later and we have lived in two cities post-graduation together – first New York City, and currently Chicago! We even have an adorable French Bulldog named Evie. 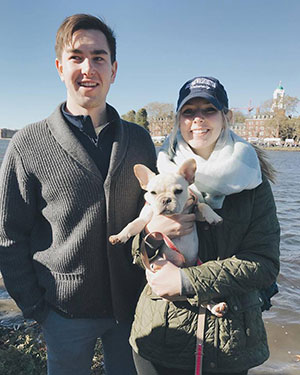 Matt and I always look forward to our trips back to GW for alumni weekend where we reconnect with our classmates and the campus!

Congratulations to Sapana Donde (Ph.D. '09) on publishing 4 papers from her dissertation! Her research on sexual assault is more relevant than ever these days. Although she was a student in the clinical program, her dissertation chair was Dr. Alyssa Zucker. Please join us in congratulating DC CFAR Investigator, Ana Maria del Rio Gonzalez, PhD, as the recipient of the 2017 CFAR Adelante Award. Through Adelante, the Centers for AIDS Research strive to develop early-career investigators who focus on HIV/AIDS treatment, prevention, and care in the Latino/Hispanic community. Dr. del Rio Gonzalez's project is entitled, "Factors associated with PrEP intentions and use among Latina immigrant transgender women in the DC metropolitan area".

Click here for more information on the CFAR Adelante Program.