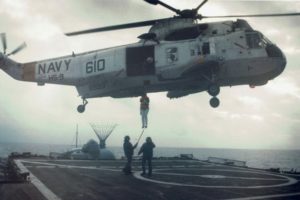 Naomi Spinrad, CCAS BA ’68, ESIA MA ’86, has had a career in journalism that has taken her around the world and provided adventures: dropping out of a helicopter onto an aircraft carrier in the Mediterranean, briefly steering an aircraft carrier and spending more time than she can count on military ships. It’s been a life far away from her undergraduate and graduate years at GW, which she started at age 15 then came back to in her early 30s.

But for a recent story, these two worlds came together. Now a contract producer with the State Department’s Foreign Press Center, Spinrad connected a team of journalists from Cameroon with Sacred Huff, LAW ’19, a GW student with a powerful story about growing up in the foster care system and earning a scholarship to study law at GW, with a mission to change the system she knows from the inside. An advertisement for GW’s Power & Promise scholarship initiative in GW’s alumni magazine spotlighted Huff and her journey, which caught the eye of Spinrad.

“I read almost anything I stumble across,” Spinrad says.

When she saw Huff’s story, Spinrad was engaged in the Cameroon project. It involves bringing a team of journalists to the U.S., with State Department funding, to report on the ground about issues important to Cameroon that also advance the U.S. interest in promoting democracy. This project focuses on women’s empowerment and civic engagement.

Who better, thought Spinrad, than a young African-American woman from a difficult upbringing who’s using her education to improve the lives of others in her situation? Huff is one of a group of American women whose stories will be broadcast in three segments in 2019 on Canal 2, the leading independent channel in Cameroon with an electronic reach across Africa.

“The hope is that it will activate young Cameroonian women to be more involved in political, business and civic life in Cameroon,” says Spinrad, “and that it will ultimately help participatory democracy there.”

Spinrad has her own story to inspire. She moved away from her New York City home and started GW as a 15-year-old freshman, having skipped fourth and eighth grades and, she says, been especially good at standardized tests. She graduated with a degree in psychology when she was just 19. Although the degree did little to predict her future as a globetrotting journalist, it did serve an important role in her development.

“I have lots of good feelings about GW,” she says. “For me it was a great place to move from the middle teenage years to early adulthood, intellectually, socially, and emotionally.”

She started what became a 26-year career at NBC News as a researcher. By year six, she was a producer. At age 31, she returned to GW to earn a Master’s degree in Latin American Studies, which NBC paid for while Spinrad also worked full-time. She found great inspiration from professors including Cynthia McClintock in political science, James Robb in Spanish literature, and Marvin Gordon in geography. But the workload strained her.

“I spent vacation one year writing my thesis and barely avoided giving up because it was tough working full-time and going to school,” she says.

In a 45-year career in journalism, she’s won an Edward R. Murrow award for NBC’s coverage of NATO’s 1999 bombing of Belgrade, Serbia and a national Emmy Award for the network’s report on the 1988 U.S. Navy shootdown of an Iranian passenger plane, which killed 290 civilians. She calls her 10 years as producer at the Pentagon the most satisfying and memorable, pointing to series she did on African-Americans in the military, HIV/AIDS in the military, and women in the military. Then there were all those high-speed adventures that counted as work.

“It’s been pretty cool,” she says in her quiet, understated way.